History of the Telescope

As you have read in “The Story of the Observatory,” the MMT has been in operation for more than three decades. During this time, the MMT has taken a leading role in the development of techniques and technologies for large observatories. It has undergone one major conversion and has been used as a testbed for pioneering science and technology throughout its lifetime.

The observatory has recently undertaken a new project, which is to gather together archival reports and documents with the goal of producing a comprehensive chronicle of the observatory over the years. While we work on this endeavor, we offer a brief summary of the history on these pages.

The original configuration of the telescope was effectively six small “individual” telescopes mounted in a circular array on the same support structure. Each of the six telescopes had a primary mirror with a diameter of 1.8-m (72-inches) and its own secondary mirror. Since they were all mounted on the same structure, they pointed in unison to the same area of the sky. The light collected by each small telescope was combined using optical and technological “magic” such that they functioned as one cohesive large telescope.

By combining the light of the six small telescopes, an effective collecting area of a 4.5-m (177-inches) telescope was achieved, making it the third largest optical telescope in the world at the time of dedication in 1979. The MMT was the first to harness this innovative design which brought the benefits of a large telescope at a cost affordable for the parent institutions. Not only is making six small mirrors much easier and cheaper than one large one, the multiple mirror design allowed for a compact telescope support structure and mount (see below) and a small building to house the telescope.

After nineteen years of productive operations, progress in the production of large mirrors (pioneered at the University of Arizona’s Mirror Lab), and new instrument technologies drove the desire to upgrade the telescope to utilize a single 6.5-m mirror in place of the smaller six-mirror array. The conversion would more than double the light-gathering power of the telescope and increase the area of sky the telescope could observe at one time (called the “field-of-view”) by a factor of more than 300. The original telescope was decommissioned in March of 1998. The telescope enclosure was modified, the optics support structure was replaced, and a single 6.5-m primary mirror was installed. The new telescope was simply renamed the “MMT,” which is no longer an acronym. 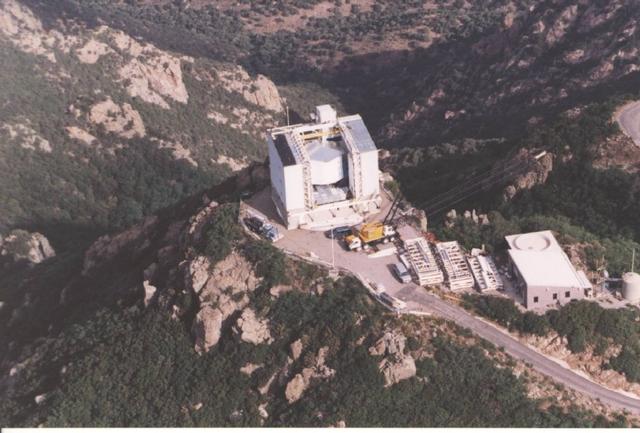 The MMT before and after the conversion to the 6.5-m mirror.

First light for the new 6.5-m MMT was celebrated on May 13, 2000. The new telescope was designed with the capability of changing the secondary mirrors to accommodate different observing goals. Operations began in 2000 with a secondary (f/9) that was compatible with instruments that existed before the conversion. Two more secondaries have now been manufactured and commissioned on the telescope: a wide-angle secondary (f/5) allowing large areas of the sky and, therefore, many astronomical objects to be observed simultaneously; and a “deformable secondary” (f/15) that allows the telescope to utilize “adaptive optics,” a technology that removes shimmering effects of the atmosphere to generate even sharper images. The field-of-view of the telescope when using the wide-angle secondary is one degree of sky, which is equivalent to four times the size of the full moon.

For technical simplicity, at the time the MMT was built most large, computer controlled telescopes were typically built on an “equatorial” mount, which means that one of the telescope’s two axes remains fixed, pointed at the celestial north pole. The MMT, however, was one of the first large telescopes to use an “altitude-azimuth” (‘alt-az’) mount instead. An ‘alt-az’ mount is one that uses both axes, the azimuth (horizontal) and altitude (vertical), to simultaneously track celestial objects. Although more complex to accurately control, the advantage of an ‘alt-az’ mount is in its compact size. The size of structure required for an equatorial mount, with respect to the size of the telescope, makes this type of telescope design increasingly less practical as professional telescopes get larger and larger. A compact mount allows for a compact telescope enclosure, and is also why the MMT building more closely resembles a cube or box rather than the more traditional rounded dome of earlier telescopes. During operation, the entire telescope building rotates, following the telescope as it tracks objects across the sky. Large shutters in the building open to allow the telescope to observe the night sky.

The MMT’s home is a four-story building with a non-rotating basement. In addition to the telescope chamber, the building contains a control room, offices, various laboratories and rooms that house computers and other equipment.

When the 6.5-m primary mirror was cast in 1992, it was the first time since 1934 that such a large single mirror was attempted in the United States. New methods developed by Roger Angel at the University of Arizona facilitated casting 10 tons of glass blocks into a honeycomb structure in a rotating oven (see the Mirror Lab’s webpages for more detailed information). It is a very long and delicate process to cast and polish a mirror of this size to the required precision. It took seven years from the start of casting to the final step of giving it an aluminum coating on the front surface to make it reflective. Rather than being an overall solid structure, the MMT’s 6.5-m diameter mirror has a honeycomb structure underneath its surface. Despite its large size, the honeycomb structure makes it possible to “bend” the mirror surface ever so slightly to compensate for the mirror changing shape due to thermal effects, or for it flexing as the telescope points to different parts of the sky.

Like many large professional telescopes, the MMT has a classical Cassegrain optical design (see figure below). Starlight is reflected from the concave primary mirror to the convex hyperbolic secondary mirror at the top end of the telescope structure. The light then travels back down toward the primary and passes through a hole in its center.

A telescope will only collect the light. To record it in the form of images or other measurements, an instrument has to be placed behind the telescope. Which instrument is used on any given night depends on the scientific goals of the astronomer working on the telescope.

If you are visiting Arizona, book a visit and come see the observatory for yourself!