The Story of the Observatory

The 6.5-meter (21-foot) diameter MMT telescope is operated by the MMT Observatory (MMTO), a joint venture of The Smithsonian Institution and The University of Arizona. The MMT is located on the summit of Mt. Hopkins approximately 60 kilometers (47 miles) south of Tucson, Arizona on the grounds of the Smithsonian’s Fred Lawrence Whipple Observatory along with a number of Smithsonian operated telescopes.

At an elevation of 2616m (8585-ft), Mt. Hopkins is the second highest peak in the Santa Rita Range of the Coronado National Forest. At this elevation, the MMT is positioned above the Earth’s lower atmosphere which helps to reduce the impact of atmospheric effects (i.e. “seeing”) on the image quality at the telescope.

An Observatory is more than just a telescope. The telescope is really just the light “collecting” equipment, while an observatory encompasses all the instruments needed to record the astronomical light collected by the telescope, the staff that operates and supports the telescope, and the facilities where the telescope is housed and repairs and maintenance is carried out. The following is a short story of how the MMT OBSERVATORY was established.

In the mid 1960s, Dr. Fred L. Whipple, Director of the Smithsonian Astrophysical Observatory (SAO), felt that although they operated more than a dozen observing stations around the world, “SAO and its companion, Harvard College Observatory, needed a real observatory”. When NASA started a program to track satellites equipped with retroreflectors from the Earth using laser systems in 1964, this was taken as an opportunity to move the SAO tracking station from White Sands, New Mexico to a site of higher altitude. It was intended that this new higher site could then eventually become the site of the observatory Whipple desired with “the most powerful telescope we could promote”.

A good astronomical observing site requires minimal cloud cover, minimal light contamination, and a high elevation. It was thought that Arizona possessed more of these attributes than New Mexico or Texas. Several sites in Arizona were considered: Yuma, which had the clearest skies but was low in elevation; the Flagstaff/ Jerome area which had higher elevation but much more cloud cover; and the Tucson area which was considered the most favorable with its high mountain tops and mostly clear skies. An added advantage was Tucson’s already growing astronomical community where collaborations could be formed with The University of Arizona and the newly formed National Optical Astronomy Observatories (NOAO) which founded its headquarters in Tucson in the early 1960s. The laser satellite-tracking station, the impetus for the location search, was built at the 7700-foot level on Mt. Hopkins, preserving the 8500-foot summit for a future observatory. And so the “Mount Hopkins Observatory”, home to the tracking station and other astronomical facilities, began taking shape in 1966 and opened in 1968. 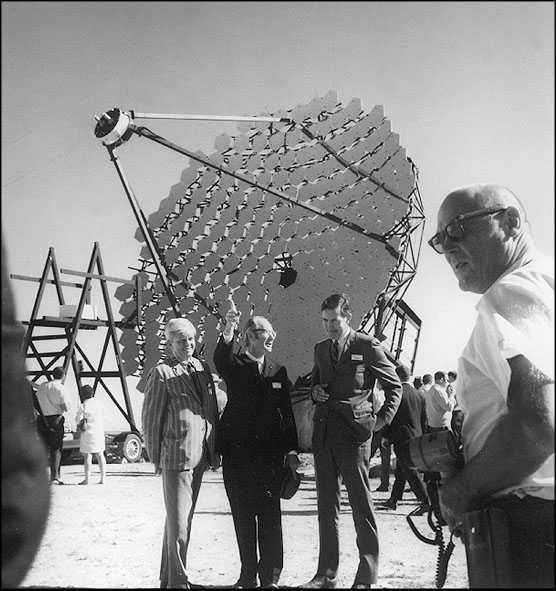 During the 1960s, astronomers at both SAO and The University of Arizona (UA) were interested in the concept of a ‘multiple mirror telescope’ (MMT) which would use an array of mirrors that focus their individual images into a single common image equivalent in detail to one obtained by a telescope with a single, much larger mirror. In 1970, the SAO and UA held joint discussions of the MMT concept and in December 1971, a Memorandum of Understanding was signed by the Smithsonian Institution and the University of Arizona, committing both insitutions to collaborate in building and operating the new MMT Observatory to be for the use of both institutions’ astronomers. Such a Memorandum was a first of its kind between two institutions to collaborate in the building and operation of an observatory.

The site for the new observatory was a choice between Kitt Peak (where ground breaking on the NOAO telescopes had started), Mt. Lemmon or Mt. Hopkins. Mt. Hopkins was higher in elevation than Kitt Peak, and had much less potential for light contamination from Tucson than Mt. Lemmon. Thus, Mt. Hopkins was selected in 1973 as the site for the new observatory which would sit at the top of the mountain. The MMT Observatory came into existence using six 1.8-m mirrors to provide an effective aperture of a 4.5-m telescope which, at the time, was the third largest telescope in the world. However, the innovation didn’t stop at telescope design, it was the first telescope to be housed in a rotating building and to be supported on ball bearings rather than hydrostatic bearings. Innovation has continued to be a strong driver for the observatory to this day.

In addition to the staff at the facility in the Santa Rita mountains, offices were set up at The University of Arizona campus in Tucson where, even today, half of the observatory staff is stationed. A core group of engineers, technicians, scientists and administrators deal with the day-to-day operation of the observatory, with assistance from astronomers and instrument builders from both UA and SAO. Though the astronomers at the parent institutions still make up the bulk of the MMT users, professional astronomers from all over the world can apply to use the telescope through public access time distributed by NOAO.