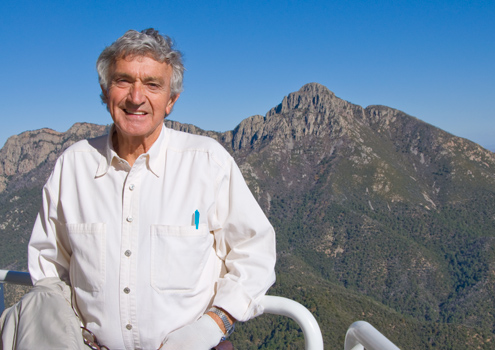 J.T. Williams has designed, built, and operated astronomical instrumentation at Smithsonian Astrophysical Observatory sites worldwide for more than 50 years. After studying electrical engineering and optics, he served in the U.S. Navy submarine service before joining the Smithsonian at the Haleakala (Maui) Observatory in 1959. He served as master observer and in technical management positions in the SAO Satellite Tracking Program (1959-65), network manager of artificial and faint radar/optical meteor programs (1965-71), field manager of the Mt. Hopkins Observatory (1972-75), manager for site planning and construction of the Multiple Mirror Telescope Observatory (1975-79), and assistant director for MMTO operations and development in collaboration with the University of Arizona (1980—2010). Williams served as project engineer in the conversion of the MMT to a single mirror 6.5-meter telescope during the l990s. He also served as interim director of the MMTO from May 2004-November 2005.

Between 1981-2008, Williams traveled to major observatories in western countries, Russia, and China at their request, serving as an expert to advise them on many aspects of observatory design and construction, mirror coatings and to identify and remedy thermal sources degrading large telescope “seeing” and image quality.