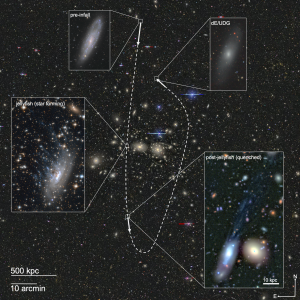 The evolutionary path of a low-mass disky galaxy in a cluster (counterclockwise) on an orbit with a substantial tangential component: (a) a star-forming low-mass spiral enters the cluster; (b) once it travels towards the central region of the cluster, ram pressure ignites star formation and causes stripping of the gas from the disc: a galaxy enters the jellyfish stage with a gas-rich tail of striped material and star formation happening within the tail; (c) the gas is completely expelled and/or consumed into stars both in the disc and in the tail, star formation is quenched, the disc expands, a galaxy becomes “post-jellyfish” like all the objects we found in the Coma cluster; (d) a few Gyr later as a result of passive evolution, a galaxy turns into a dwarf elliptical or an ultra-diffuse galaxy depending on the progenitor’s mass and gas content.